Have you ever wanted to get lost in the moment and live outside your comfort zone? I do every day and that’s how this crazy idea about taking my family to live in Spain came to be—even if only for a summer.
I’ve always had a wanderlust to explore the world and meet new people. I learn and form opinions based on a lens of experience. And the best way to understand another culture is to dive right in and live abroad.
My love for travel began at a young age. I escaped through books and movies. But journeying to Tatooine or helping Indy find the Lost Ark were impossible. My family traveled some but not to the extent I wanted and rarely abroad. By the time I was 15, I knew I had to see more of the world. From that day forward, every penny I earned went into a travel fund.
During high school, I participated in a summer abroad program in Spain. I fell in love with the country and its people. This trip opened my eyes to the idea of living in a foreign land and influenced what I’d study in college.
My degree in International Relations was a no brainer. I became a walking encyclopedia on geography, politic science, history and economics. I focused on WWII and beyond with an emphasis on how technology affects society. I also continued to study Spanish. A language I would study for over 10 years and became almost fluent in but then regrettable not from lack of use.
After college, I took my hard earned money and bought a Eurorail pass and an airplane ticket to Europe. I spent the entire summer into fall traveling across Europe with my good friend Jenny Walker. We visited every country and historical site I’d ever studied. It was a total mind blow to walk on the same cobblestone streets as those historical figures I had only read about. And we met so many interesting people along the way. I’ve got an incredible journal and scrapbook from this journey. The entire trip was an adventure and I enjoyed every single moment. I was completely outside my comfort zone and I loved it.
I had planned to end my travels in Barcelona, find a job and start a new life. But my travel funds were running out and the reality of life settled in. Jim and I had met the previous summer. And I had to make a choice. He flew out to Europe and joined me in Greece. After three weeks together, I chose to come home and pursue a career in high tech. And start my life with my future husband.
Jim and I never stopped traveling even when kids came into the picture. But I didn’t want to bring my kids abroad until they were older. I wanted them old enough to appreciate such a trip and understand the significance of the world we live in. That the United States is not the center of the universe. Take them out of their comfort zone and challenge them to live in a different world. But why Barcelona? I thought my family should get to know the city that almost seduced me away from high tech career and my life with Jim.
This summer, my family will live in Barcelona, Spain. We don’t have the luxury to take the entire summer off from work so we’ll do a combination of vacation and work. During the work week, the kids will go to a Spanish immersion program. Nights and weekends we’ll explore the city and surrounding areas.
We’ll be living outside our comfort zone, without our go-to stores, friends, and our dog Cooper. It’s a new way to live. But isn’t that the point of life? To live in the moment and live life to the fullest. And it’s the best way to evolve and understand more about yourself and the world you live in. Go team Ringham! 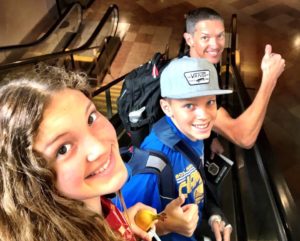