You stumbled and fell. It happens to the best of us, even to Olympic sprinters with the eyes of the entire world on them. Stumbling is evidence that you are testing your limits. It should serve as motivation to do it again and to try a little bit harder. You’re almost there.

If your New Year’s resolution didn’t quite make it through January, you’re not alone. That doesn’t mean that this is the end of the story. The next chapter begins with these words: “Do Not Quit on Your Goals.” January was named for Janus, the Roman god of looking forward and looking back, 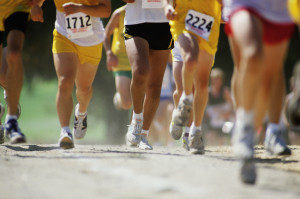 and in this spirit, you should take the time to see how you got here and where you’re going next. February was named for the Latin word februum, meaning “to purge.” It was dedicated to throwing away what you no longer needed in order to move forward. Therefore, February is a time to let go of the past and recommit to your 2015 resolutions. In other words, it’s okay to stumble as long as you keep your eye on your goals, and not your mistakes.

Somewhere – on your office wall, on your bathroom mirror, or on your smartphone lock screen – there is room for at least one of the quotes below.

“I did.” That was Itzhak Perlman’s simple encouragement to a fan who gushed that he would give his life to be able to play violin that well. The story may be apocryphal but it accurately reflects Perlman’s dedication to his art.

“Full RUD (rapid unscheduled disassembly) event. Ship is fine minor repairs. Exciting day!” This was Elon Musk’s tweet about how close he came to demonstrating a reusable rocket. In January, his Falcon 9 rocket tried to land on a floating platform instead of dropping into the ocean or burning up in re-entry. Instead of gently touching down, the rocket smashed into the platform and exploded.

“5,000,000.” That’s how many copies of Zen and the Art of Motorcycle Maintenance sold after it was rejected by 121 publishers. The Guinness Book of World Records recognized this inspirational work on excellence as the most rejected best-seller ever written.

Anything worth doing is worth doing badly until you can master it. Treat yourself like an apprentice. Doing something different takes practice. You will only succeed by iterative improvements. Next time you stumble, take a moment to look at the world from this new perspective. In every stumble, there is a lesson. Lace up, put on some band-aids and get back to the starting blocks.